Consider today’s post a confession of why I ditched interactive notebooks.

Unless you’ve been teaching under a rock, you’ve probably heard of interactive notebooks, or INBs. They’re a pretty hot educational trend right now, and I don’t see that ending any time soon.

I LOVE the idea of INBs … the coloring, the foldables, the input and output pages designed to help students think and internalize more. It makes sense to me that teaching and learning this way would be effective and engaging.

I tried INBs in my classroom about 5 years ago. They weren’t quite all the rage then as they are now, and I was the only teacher in my small district to attempt them. I spent the summer researching, planning and prepping. I got lots of materials ready for my first unit, Scientific Method, and started making my own notebook as a master copy.

I bought plastic baskets at Dollar Tree for each of the tables in my room and filled them with colored pencils, glue sticks, scissors, tape and highlighters. I bought 5 red plastic milk crates (one for each of my classes) and set them up. I wanted my kids to leave their INBs in the classroom most of the time, unless they needed them at home for a specific reason such as studying for a test. My students are Freshmen, and in my experience most of them are totally unorganized and I envisioned them losing their notebooks during the first month of school.

I was so excited to get started with these!

We spent the first few days of class getting the notebooks set up. I talked about how this was going to be their “textbook” for the year and how helpful it was going to be to them. I showed them the baskets on their tables and hoped that they’d take ownership of the supplies and use them well.

Within a few days, issues were arising. Some of the kids were way faster than others at cutting and pasting. They saw the cutting at the beginning of class as more social time than class time and I had difficulty enforcing a time limit. Moving on after 5 minutes like I said I would wasn’t really conducive to effective teaching when a third of the class wasn’t done gluing their sheets in. All that meant was that I’d then spend the rest of class helping them play catch up.

Some of my girls really bought into the INBs. They loved the artsy aspect of it and spent time keeping their notebooks neat and up-to-date. Most of the boys, on the other hand … well, lets just say that they were NOT invested in their INBs at all. I started finding broken colored pencils on my floor after certain classes left. Some students were using the scotch tape to tape the pencils together in bunches! I’d been teaching for about 25 years at that point and didn’t really have discipline issues in class, but this sort of thing was bothersome and was becoming expensive.

I wasn’t ready to give up though. By now we were into the second marking period and I was looking for ways to modify. I realized that I was behind in my lessons compared to the previous year, and I attributed that to the lost time spent cutting and taping. So I purchased a paper cutter for my classroom. I spent my own time after school trimming all of the inserts for the notebooks so that all the kids would have to do is tape them to the appropriate page. It added to my prep time and did seem to save us a little bit of time each day.

There were other issues as well. I did not foresee the problem that some kids would have in numbering their pages correctly. If their pages weren’t numbered right, then when they were instructed to tape something to a specific page, hands went up with “I already have something on that page!” It made it difficult for me to do spot-checks of notebooks since I couldn’t just pick a certain page to check and expect to see the same thing on all of the notebooks.

Even with all of the issues, though, I would have stuck with it if I truly saw an increase in learning. Unfortunately, I saw the opposite effect. The scores on my unit tests were lower than the previous year and more students were failing the tests. I did some soul-searching and decided to stop the INBs in the middle of the third marking period. I simply told the kids that the notebooks weren’t really working out as well as I’d hoped and that I wanted to go back to regular binders and notes, along with our usual class activities. The relief in the room was palpable!

So we finished out the year in a more “traditional” way. I’m happy to say that my Regents test scores at the end of the year were on par with previous years. I was happy that my students hadn’t shown any decline in learning after all was said and done.

Now with all of that being said, I’m not trying to discourage anyone from using INBs in their classroom! I wanted to share this so that other teachers may also realize that they’re not for every teacher in every classroom. A lot depends on the kinds of students you have and what you’re teaching.

So … that’s why I ditched interactive notebooks. Kind of! If you’d like to know what I use instead, click here to find out!

Have you tried INBs in your classroom? We’d love to hear your experiences!

Previous Post: « How to Use the 5E Model With Blended Learning
Next Post: I Switched to Interactive Binders »

This site uses Akismet to reduce spam. Learn how your comment data is processed. 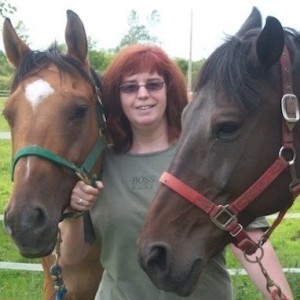 Hello! Welcome to my little slice of the Internet!

I'm Debbie ... retired teacher, curriculum writer, nature-lover, and bibliophile. I love planners, both paper and digital ... planning is my "me"time! I live in the Adirondack Mountains of New York State with my husband and our 3 furbabies. That's me in the picture above with our two horses, Clifford and Shy ... they are in addition to our other 3 pets.

I'm passionate about helping science teachers save planning time by creating rigorous, engaging curriculum materials to use with their students. My hope is that you'll find useful, helpful resources here. Please make yourself at home! Read More…

Stay up to date

Stay up to date with all the latest